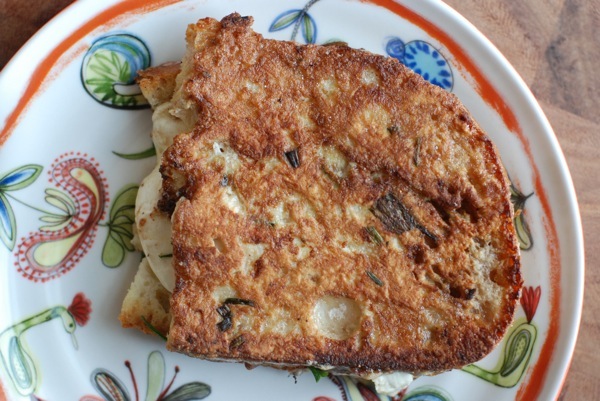 For food lovers, Hanukkah is an eight-day period in which to justify that guilty pleasure, deep-fried food. Latkes and sufganiyot (jelly donuts) might be the most traditional Hanukkah fare, but they are the tip of the iceberg when it comes to things improved by a hot oil bath.

The reason we eat fried foods on Hanukkah is well-known, if not entirely logical. Because a one-day supply of oil kept the menorah in the Temple lit for eight full days, we have the tradition of consuming as much oil as we can, in remembrance of the miracle.Â So let’s fry some stuff, shall we?

Armed with a legitimate excuse to deep-fry, I took to the kitchen in search of the perfect recipe for one of my favorite weekend lunches, Mozzarella in Carrozza. In Carrozza is Italian for “in a carriage.” The name is apropos: fresh mozzarella cheese is sandwiched between slices of white bread and cradled in a cloak of flour and egg, then fried golden-crisp in a bath of butter and olive oil. After a turn over the heat, the mozzarella melts, the bread crisps up, and the sandwich becomes the sort of thing you must eat, immediately, and possibly a few times in a row.

After making a straightforward version of this sandwich a few times, I decided to change it up. Inspired by a recipe for salt and pepper French toast on Food52, Iâ€™ve taken the sandwich in a more overtly savory direction, adding cilantro, chives, scallions, and sriracha to the egg batter. The result is plenty spicy, and the herbs bring freshness and levity to an otherwise indulgent dish. The original is good, but this version is downright addictive. So if you’ve had your fill of latkes and your looking for something else to dunk in an oil bath, take a swing at Mozzarella in Carrozza. Let Chanukah be your excuse.

Lay 3 slices of bread on a cutting board or work space. Distribute mozzarella slices on the bread. Top each with another slice, and crimp or pinch the edges of the two slices together to form a pouch around the cheese. You should have three sandwiches.

Put milk in one bowl, flour in a second bowl, and beaten egg, herbs, and sriracha in a third bowl. Add salt and pepper to the egg mixture.

After 2 minutes, check the underside of the sandwich. When it is golden brown, flip and cook the other side another 2-3 minutes, until golden. Repeat with remaining sandwiches.

Meanwhile, make dipping sauce by combining 2 tablespoons ketchup with 1 teaspoon sriracha. Serve sandwiches as soon as theyâ€™re ready, with dipping sauce on the side.